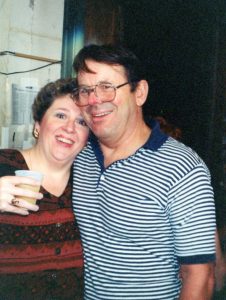 Allan performed in over 35 principal roles with SLOC (1957-2008). His first show was The Merry Widow. Allan was Past President (1965-1966) and VP Facilities. He performed in 4 Anniversary Shows; Directed 5 SLOC shows and was the recipient with his first wife, Marion, of the Etta Moore Award and the Gwen Fraser Artistic Award (2010 – 1st recipient).

Allan’s favorite directorial piece was Lies & Legends in October. 1989.This production won many TANYS (Theatre Association of NYS) awards & was selected to present at the International Theater Festival in Spain. He worked diligently to coordinate this repeat performance – a wonderful experience & memory for the cast & crew and SLOC.