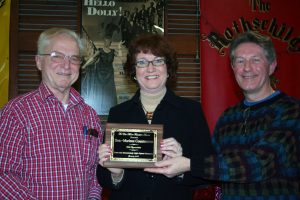 Don with his wife, Marlene and Bob Farquharson. Don and Marlene were recipients of the Etta Moore award in 2008.

Don was a versatile theatrical person. He was a principle actor, director, lighting man, producer, and set builder, etc.  I was Don’s producer for the last show he directed at SLOC, Robber Bridegroom. Don was a “real hands” on person. He not only directed the show, but he also designed and built the set. When I directed the show, Red, Hot and Colefor the Not So Common Players, Don helped me by being my set designer and builder. Don appreciated when you helped him, and he never forgot.

Don was a graduate of SUNYA (University at Albany) with a B.S. and a M.S.  He also held a master’s degree from Union College. He became a math teacher at Troy High School and Albany High School for a few years, and then made at career change, being employed by the Colonie Block and Supply Company. He was married to Marlene Countermine, who has contributed a lot to SLOC as rehearsal secretary and other duties. Don is survived also by his three children: Cara, Tom, and Bradley.