The Schenectady Light Opera Company (SLOC) was born in 1926 when a group of Van Corlaer and Draper alumni joined together to “present short plays containing songs and comedy acts.” The group, directed by Mrs. Etta Moore, a music teacher in the Schenectady Schools, was known as the Bellevue Young People’s Chorus. The group first presented concerts and short operettas before moving on to the Gilbert and Sullivan shows, Trial by Jury and Patience, in 1933-1934. In 1936 the Bellevue Young People’s Chorus changed its name to Schenectady Light Opera Company.

In the spring of 1942 the Company disbanded for the duration of the war, due to the shortage of male members. In 1946 the group got together again and presented H.M.S. Pinafore at Mont Pleasant High School, the Company’s adopted home. The manpower situation still posed a problem. A note in the group’s newsletter stated, “To maintain the balance of the parts, no new sopranos will be admitted unless they bring a male.” 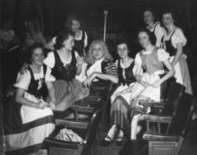 Another problem was storage. The Company had accumulated vast quantities of costumes and sets, so a search was begun for a building SLOC could call “home.” The old Craig School on Balltown Road seemed ideal; however, the zoning laws, made it necessary to petition the State Supreme Court in order to allow a membership corporation to own property. That was successful, and henceforth, Craig School was to be known as the Opera House.

Until 1950, productions were given at Mont Pleasant High School, with the exception of “road” shows to Cobleskill, Schoharie and East Greenbush. In November 1950, SLOC presented The Mikado, in the Erie Theater. “Move-in” became a SLOC tradition at the Erie. Friday night the sets were loaded at the Opera House and moved into the Erie after the late movie. Showboat was the last SLOC show at the Erie before it closed in 1956.

Burnt Hills High School hosted The Merry Widow in 1957, and Finian’s Rainbow became the first SLOC show in the new Niskayuna High School. In 1959, SLOC first ventured into modern opera with presentations of The Telephone, Down in the Valley and RSVP. SLOC later produced The Medium and Amelia Goes to the Ball.

Although the theater continued to produce Gilbert and Sullivan in the 1950’s, the productions of Brigadoon, Carousel, Showboat and Oklahoma marked the transition from operetta to truly American musical theater.

The 1960’s produced SLOC’s first attempts at modern musical comedy – The Music Man, Where’s Charley?, Guys and Dolls, and Bye Bye Birdie – as well as the classics, The King and I, My Fair Lady, Kiss Me Kate, and South Pacific. The decade closed with the beautiful She Loves Me, and the exciting West Side Story. The 1970s opened with the comedy A Funny Thing Happened on the Way to the Forum, and the operas Amahl and the Night Visitors and Help, Help, the Globolinks! The 1970s also brought productions of the popular Mame, Hello Dolly!, Annie Get Your Gun; Fiddler on the Roof, and Gypsy.

In 1971 SLOC sold the “Opera House” on Balltown Road and purchased the Beth Israel Synagogue at 826 State Street, Schenectady. Thus began the huge task of turning the building into a theater. In 1972 the new Opera House officially opened with Jacques Brel. This was the beginning of the cabaret shows with table seating and wine, bread and cheese. The SLOC season now included two shows at the Opera House, two shows at Niskayuna High School, as well as concerts, revues and workshops.

In 1973 SLOC moved its set building operation to the Turn Verein gym located directly behind the Opera House. That closeness to our Opera House greatly aided all aspects of the technical needs for each production.

In 1974 SLOC made an early contribution to the nation’s Bicentennial with a production of 1776. The Company’s George M! was also an exciting tribute to our country, but also, in the SLOC tradition, a most appropriate way to help celebrate its 50th anniversary. In 1976-1977 we were still performing four shows- two at Niskayuna High School and two at the Opera House. During 1977-1978 SLOC purchased a nearby State Street building to use as its costume house.

In April 1980 SLOC moved from, Niskayuna High School to Proctor’s Theater, with Shenandoah, and continued its four-show season (two at the Opera house and two at Proctor’s) until 1990 when SLOC did The Most Happy Fella at Proctor’s Theater. In 1987 SLOC purchased a small building on Taurus Road in Niskayuna to use as its set-building facility. We no longer had to keep moving all our sets to rental venues.

In the fall of 1990 SLOC performed one more show at Niskayuna High School and then began performing only at the Opera House until presenting its 70th anniversary celebration in 1996 with a birthday bash at Proctor’s. 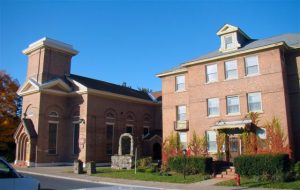 In April 2010, SLOC purchased a several buildings from the Albany Catholic Diocese that were St John the Baptist, between Franklin and Liberty Streets in Schenectady. This was a major undertaking in order to have sufficient space for performing, rehearsal, storage of costumes and equipment, on-site office and meeting needs, live-in property manager, rentals, plus parking and future additions for set construction and storage. It also is much nicer for audiences, production teams and other volunteers, since it is handicapped accessible, has convenient parking, restaurants within walking distance and is in Schenectady’s developing arts district. 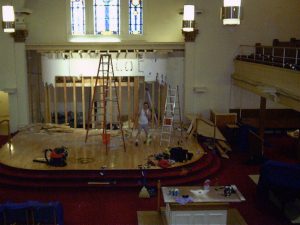 After SLOC purchased its new home, the Northeast Ballet Company also needed a new home and moved in as a lease tenant in October 2010. This fit the vision SLOC’s Board and members had of creating a small performing arts complex for local groups. NEB has expanded their lease space as they have grown in the SLOC performing arts complex.

SLOC has also expanded its resources to offer youth the opportunity to develop their performing, technical and artistic skills with productions and workshops. 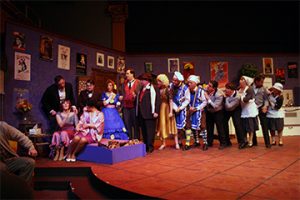 SLOC’s future plans are to improve the facilities with a new lobby and a set construction and storage facility. The SLOC Board of Directors has developed a new strategic plan, which provides guidance for operational improvements to strive for success internally as well as for its customers.