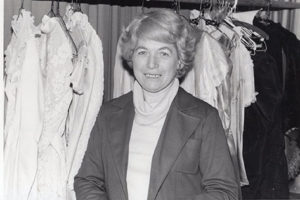 A native of Blackpool England, Molly costumed countless SLOC productions during the 1970s, 80s and 90s.   Not just attached to a sewing machine,  Molly also appeared onstage in MAME, ANNIE GET YOUR GUN, FIDDLER, 10 NIGHTS IN A BARROOM, CINDERELLA (88), OLIVER (71), MY FAIR LADY to name just a few,  and produced FUNNY GIRL (75) and 1776 (74), (85).  After her husband Bill’s death, Molly became a fixture in the SLOC costume house, organizing and curating the vast costume collection.

I remember Molly Wright teaching me an authentic Cockney accent for my role as Arthur Kipps in Half a Sixpence. Or, as she taught me, AHFER KIPPS – Steve Leifer