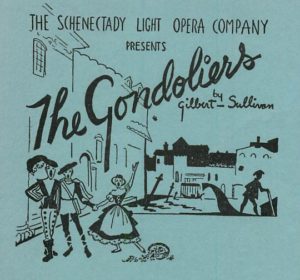 Twenty years before the opening of the action, when Casilda was yet a baby, she and the infant heir to the throne of Barataria were married. Shortly thereafter he disappeared, supposedly abducted to Venice by the Grand Inquisitor, Don Alhambra, and there brought up. At length, as the result of insurrection, the throne of Barataria became vacant and Casilda’s father, the somewhat moth-eaten Duke of Plaza-Toro, wished to establish his daughter as Queen. He accordingly went to Venice, accompanied by his wife, daughter, and Luiz, his drummer, in search of his daughter’s missing husband.

As the curtain rises, a chorus of contadine (peasant girls) are waiting for the two leading gondoliers, Giuseppe and Marco, to come and choose their brides from among them. By a sort of blind man’s buff, the two men choose Tessa and Gianetta and they all dance off to the altar.

The Duke of Plaza-Toro and suite meanwhile arrive in Venice. The Duke tells Casilda about her childhood marriage. Luiz and Casilda (who, unknown to her parents, are in love with each other) accordingly renounce their love. Don Alhambra appears and tells them that the person they are seeking is either Giuseppe or Marco, he is not sure which. He will send for the nurse who took care of the infant prince and when she arrives, she will be able to tell them which one it is. Meanwhile, Giuseppe and Marco are to go to Barataria at once and rule jointly until the matter is straightened out. Giuseppe and Marco are overjoyed at the prospect and, with plans for instituting an ideal state in Barataria, they set sail. Tessa and Gianetta must remain behind, with the vague promise from Don Alhambra that they may later join their husbands with the idea that one of them will be Queen.

Act II is set in Barataria, where Giuseppe and Marco, with the gondoliers, have established their extremely limited monarchy. Everything seems to be going well, except for the fact that they miss their wives. Suddenly Tessa, Gianetta and the girls appear, having become impatient and made the trip to Barataria in spite of Don Alhambra’s injunction. General happiness now reigns and all dance a cachucha.

A slight cloud appears on the horizon when Don Alhambra enters and points out the weaknesses of Giuseppe’s and Marco’s system of government. When he learns that Tess and Gianetta are there, he is somewhat disturbed and tells them about the prince’s infant marriage. This revelation is a heavy blow to the hopes of Tessa and Gianetta, for not only is neither of them to be Queen, but also one of them is not married at all. The Duke of Plaza-Toro enters and further criticizes Giuseppe’s and Marco’s court and attempts to teach the joint rulers some court etiquette. At length, Inez, who has been the nurse of the baby prince when he was married to Casilda, arrives and discloses that neither Giuseppe nor Marco is the rightful heir, but Luiz. Thus Casilda is united with the man she loves, and Giuseppe and Marco return to their wives and gondolas.