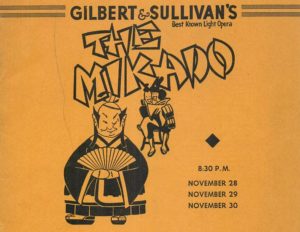 The son of the Mikado, while traveling about Japan disguised as a wandering minstrel, Nanki-Poo, to escape marriage with the unattractive Katisha, falls in love with the beautiful Yum-Yum who is engaged to Ko-Ko, her guardian. Ko-Ko, however, has been condemned to death for flirting and when Act I opens Nanki-Poo is hastening to the court of Ko-Ko to see if Yum Yum is now free to marry him.

From Pooh-Bah and Pish-Tush, Nanki-Poo learns that Ko-Ko has in effect been reprieved by having been made Lord High Executioner and is going to marry Yum-Yum that afternoon. Suddenly, a letter comes from the Mikado noting that there has been a shortage of executions in Titipu and ordering Ko-Ko to execute somebody within the next month or lose his position as Lord High Executioner. Nanki-Poo plans suicide because he cannot have Yum-Yum, and Ko-Ko sees a chance to obey the Mikado’s order by turning the suicide into an execution, to which Nanki-Poo assents on condition that he be married to Yum-Yum for one month. Katisha suddenlty appears, penetrates Nanki-Poo’s disguise, makes an attempt to stop the wedding, but is shouted down by the populace.

With the opening of Act II a few moments of bliss are interrupted by Ko-Ko who has just learned that the law requires Nanki-Poo’s widow to be buried alive when he is executed. To save Yum-Yum from this fate, Nanki-Poo decides to kill himself at once. Ko-Ko, in desperation, hits on the ingenious scheme of faking an affidavit of execution by bribing Pooh-Bah. The Mikado arrives and with him, Katisha. Ko-Ko gives His Majesty the fake certificate of execution, but Katisha reveals to the Mikado Nanki-Poo’s real identity. The Mikado orders that Ko-Ko and all involved be boiled in oil. Ko-Ko flees to Nanki-Poo for help. Since Nanki-Poo has married Yum-Yum, Katisha insists on their execution. Ko-Ko solves the problem by offering his hand to Katisha; and, after he sings her the touching balad of “Willow-tit-Willow,” she accepts him. The end of the opera comes with Nanki-Poo’s revealing himself as the son of the Mikado.